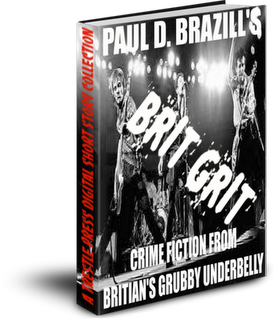 “America may well be the official home of pulp and noir but the United Kingdom, long perceived as the land of Dame Agatha cozies and stuck up, Latin quoting police detectives, also has a grubby underbelly which has produced plenty of gritty crime writing. And there is a new wave of Brit Grit writers leaving their bloodstained footprints across this septic Isle too.”


So writes Spinetingler Award nominee Paul D.Brazill at the beginning of this eagerly awaited collection of his short stories released by Trestle Press. This collection has been much anticipated by those involved in the genre and fans of the gritty, witty writer. A full review of will follow but this is a Clarion call for you download this excellent collection. Paul is already romping up the kindle chars faster than Usain Bolt on speed so please help this ambassador for British crime fiction achieve the success he richly deserves.