The Dark Winter by David Mark

David Mark brings Hull screaming and kicking to violent life in his debut novel The Dark Winter. A police procedural novel that is drawn with vivid characters and stark deacriptions.

Detective Sergeant McAvoy is a troubled character. The author eludes to past events that have left McAvoy out in the cold and untrusted by colleagues. Events that led to the dismissal of a senior officer. The air of mystery suurounding McAvoy is one of the most endearing things about the novel and Mark uses it to good effect.

McAvoy is no two dimensional character. A Scottish crofter's son, a country nan who has an exotic wife and cultured tastes. Trish Pharoah, NcAvoy's superior, is also exceptionally well drawn, she is very much larger than life and a likeable character who is more than a match for her hard drinking male colleagues.

David Mark has crafted an excellent debut that was a thoroughly enjoyable read. However, it's not without it's flaws. At times he was overly descriptive and on those few occasions it detracted rather than added to the novel. When his deacriptions were effective they were very effective. At times the dialogue was a little disjointed, stilted or didn't quite fit.

Despite these minor issues I read it quickly and with gusto and I won't heaitate to read the next novel by David Mark. Highly recommended.

From A Crowded Mind by David Barber 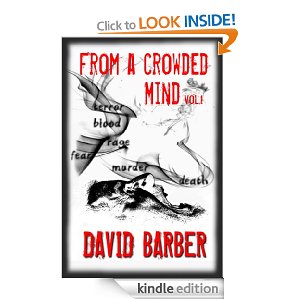 In this slick and well edited collection of short stories David Barber uses all the tricks and tools available. Misdirection, deception, bluff and double bluff keep the reader guessing at every turn. Gritty crime tales of violence, revenge, greed, lust and murder will entertain you. Stark and realistic descriptions bring his settings to violent bloody life. Barber employs a light dusting of humour at times and fluid action to make the finishing touches to an outstanding debut collection.

My favourite? Perhaps The Stranger. The action is slick, the descriptions excellent and Barber hints at so much more to come. This collection stands out from the crowded short story marketplace. A thoroughly enjoyable read.

Scream If You Want To Go Faster by Russ Litten 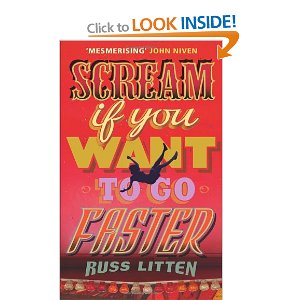 I found this novel hard going at first. A lot of characters and scenarios came racing at me thick and fast. The structure is unusual too, with small snippets, mini chapters if you will, headed by a time and location.

However, once I’d settled into it and gotten used to the style I started to enjoy the book. Piece by piece Litten builds up the story and it seems every new page added another piece to the jigsaw.

The author's observations were spot on. He brings humour, pithy observation about life and a very diverse range of characters. The novel is set in Hull and written in the local dialogue. For those outside of Hull this won't spoil your enjoyment even if it does take you a little while to get used to it.  The events in the book take place during the annual Hull fair week when a huge travelling fair comes to the city every October. This is a major event in the local calendar and everyone in the city feels they have to visit the fair at least once.  Litten uses this local sense of excitement and anticipation to great effect within the story.

Litten scores points not only for his excellent characterisation but also for his talent for creating just the right atmosphere. His descriptive writing is also top notch. I started this novel feeling a little bemused and finished it having enjoyed it thoroughly and admiring the talents of Russ Litten. A must read for most folk. A mandatory read for the folk of 'Ull! Russ Litten could well be Hull’s answer to Irvine Welsh.

Sh*t Happens is a laugh out loud funny book. Razor sharp wit and comical descriptions are used to good effect by the author to create a novel that guarantees a chortle a chapter.
The author slowly builds up the story of Rose, a single Mum living on a rough housing estate. When Rose's abusive ex-husband is found brutally murdered she finds herself in the frame for it. The police seem to dog her every step and local hard woman-cum-gangster Vera Devlin is also after Rose for her own mysterious reasons.
The novel is peppered with colourful characters and there is plenty going on to entertain the reader. On just a couple of occasions I felt the humour was overdone and a little obvious. However, at times Wharton's descriptions were crisp and excellently observed and you could see the potential she has for creating gripping and immersive settings.
Overall perhaps a little too long and quite slow going at times but there is plenty of twists and enough going on to keep the reader entertained at all times. An excellent read that I recommend.
Genre:  Crime/Humour
Publisher:  Byker Books
Format:  E-Book
Rating:  4/5
Posted by Groovydaz40 at 04:09 No comments: