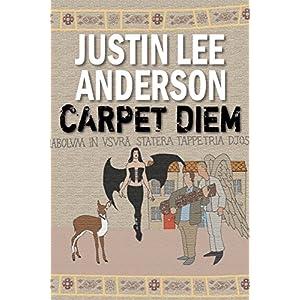 If you locked Tom Holt in a room with Douglas Adams, Neil Gaiman and Terry Pratchett with a PC and gave them Tequila for long enough the resulting novel would probably be something like Carpet Diem.

The permanently befuddled main character Simon is extremely reminiscent of Adams Arthur Dent. I liked him immediately. It's clear that Justin Lee Anderson is also a fan of some of the greats I mentioned above.

Carpet Diem has everything that the fan of comic fantasy could possibly want. We have angels, demons, witches, assassins, pirates and ninjas! There is a deadly battle that will decide the fate of the world and our hero Simon must step up to the plate and make the final decision about who will be the victor. Confused? You will be. I loved it.