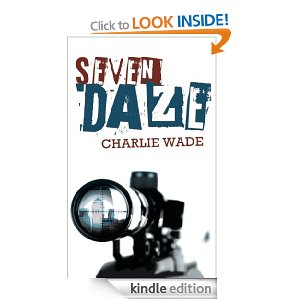 Seven Daze is the story of Jim who has just been released from prison. His former cellmate, lifer Harry, had sold the idea of becoming a contract killer to him and as he stands in an alley waiting to complete his first contract things go badly wrong. His mark has a heart attack. Jim and city worker, Charlotte, who appears out of nowhere help out the target and from there Jim’s nightmare begins. He must make ten grand in seven days or he’ll end up in the Thames wearing concrete leg warmers.

They say the devil is in the detail and that’s how it is with Charlie Wade’s writing. We get to see all aspects of Jim’s life as he struggles to repay the debt to his former employer. What Wade does well is the fine details. He creates a fully rounded and in depth character with Jim. His observations are often funny, wit, sarcastic and cynical sometimes all four at once.

I very much enjoyed the insights given into the character of Jim, as much as I enjoyed the events that unfolded. You can’t help but feel for Jim’s plight and most of those he is robbing won’t miss the money. After their shared experience Jim’s developing relationship with Charlotte has the reader wondering where this will go. Charlie Wade does a great job of keeping the book interesting despite his need to have to repeat some events given the nature of Jim’s task.

Overall a very enjoyable novel. The author writes in a very British way and his observations in the novel would, perhaps, appeal more to a British audience. He seems to play down events in a very British fashion where our friends over the pond might be tempted to make it more visceral. This to me makes it more effective, more realistic and more enjoyable for the honesty. Charlie Wade has made his mark here with his own brand of crime fiction. I hope more follows.