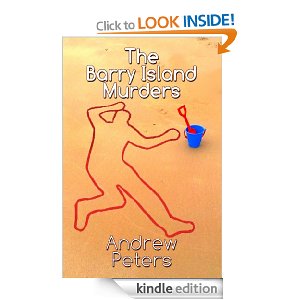 This is the third book I've read by Andy Peters. His dialogue with the reader remains endearing and the source of much of his humour. In this case Superintendent Williams (The almost legendary Williams of the yard) is recounting some infamous murder cases to a journalist. The murders all take place on Barry Island in the sixties and yes the occasional Welsh gag slips in.

In previous reviews I've made much of the humour but the reason I enjoyed Barry Island Murders is that the author gave a very thorough recount of the murders and how they are solved. A quirky police procedural if you like with the action happening in the sixties and being recounted to a present day journalist. The stories are well constructed and you find yourself wondering not only who did it but how they achieved it.

The first story The Journey To Mars is a perplexing case and had me scratching my head. I must stop that with my dandruff and all. A death at Barry funfair and a killer to apprehend leaves our man struggling for clues. A young is woman murdered whilst on a ghost train ride and there is no sign of a killer.

The Playground the second story sees the death of an elderly gentleman in a strange location. Williams is on the scent faster than a bloodhound after a pork pie.

The final case The Graveyard sees the death of a young woman in a graveyard of steam engines but who is she and why is the dresser at her guest house full of sexy lingerie? Williams must take a closer look but not necessarily at the lingerie.

No doubt The Barry Island Murders will be too sedate for some. Williams of the yard is no Jack Reacher with his chiselled chin and perfect teeth. No guns, bombs and few girls to excite the reader, just three deftly recounted tales with a gentle humour running through them like a vein in a good cheese. Witty, offbeat, funny, quirky but most of all a great and fun read.
Posted by Groovydaz40 at 04:47