Hey, That Robot Ate My Baby by Zelmer Pulp 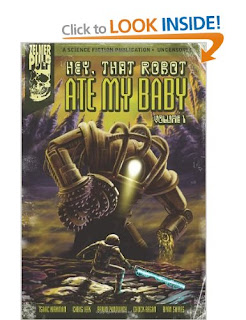 Clever and fast paced with some great ideas. As those in the future seek to manipulate the past there are dire consequences in the present. Chuck Reagan delivers an in depth tale of a technologically different future where we live our lives virtually and our put is just a meat sack attended to by robots. Social approval via social networks is king here. Chillingly detailed.

Wherever The Light Ends by Ryan Sayles

A chilling story that blends the oddness of a carnival with the interior of an alien spacecraft. Powerful scene building had me right there with the characters. Good old fashioned paranoia and fear abound. As a cop seeks to uncover the facts behind a mysterious double death Ryan Sayles slowly unearths a tale of alien interference.

Panowich asks in bold letters what if hackers could control people? Panowich weaves in some clever twists and turns and takes computer hacking to a whole new and scary level.

This Protean Love by Isaac Kirkman

I'd rate this story highly for the chapter titles alone! Some unique ideas and a strange melancholic, lonely world make this perhaps the story of the collection. So deliciously descriptive as to be poetic at times I was held captive by this story.

The Whores of God by Chris Leek

Chris Leek finishes off this excellent collection with a hilarious romp around a doomed spacecraft. Snappy one liners and violence are the order of the day. This cynical view of the future delivered with tongue firmly in cheek.

A variety of themes and styles here, enough to suit almost any taste. It's clear that the contributors were carefully selected and each of them brings something a little different to the party. An accomplished and riveting read.