The Van by Roddy Doyle 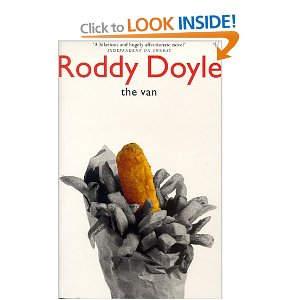 Roddy Doyle is best known for being the author of The Commitments which was made into a smash hit film. When I started reading The Van I expected the same kind of larger than life characters as The Commitments and I wasn't disappointed.
Jimmy Senior is unemployed and depressed. He spends his time with his granddaughter trying to fill the endless days. He tries his best to make light of his situation but his anger often gets the better of him.
This is where we find ourselves at the start of the novel. Doyle injects humour into everyday situations whilst at the same time showing us some ordinary Irish folk having a very rough time of it.
When Jimmy Senior's friend Brendan, known to all as Bimbo, is made redundant Jimmy's mood is lifted as he gets to have some company to fill the long and lonely days. When Bimbo's redundancy cheque arrives Bimbo has an idea and the two friends embarked on an unlikely business venture.
The story isn't the fastest moving and it's a story about people rather than events. Doyle's comic touch livens things up nicely and I found myself laughing out loud often when reading it. There's a melancholy to it but this seems to blend nicely with the humour. A tale ultimately about a friendship between men that was a fantastic read. My one criticism is that the ending petered out a little and could have been better developed.
Genre:  Humour
Format:  All
Rating: 4/5