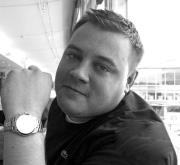 Pete Sortwell is a friend of mine and a blog mate from the now defunct Close To The Bone blog. After spending his childhood lying to his mother about eating all the crisps Pete now lives with his wife and on top of lying about eating all the crisps he has put his habit of lying to good use and started writing fiction.
Enjoying success in the short story world, Pete’s first short story was published by Bykerbooks in March 2011. He was runner up in the 2011 Lightship publishing flash fiction competition. and has featured in charity anthologies, Brit Grit Too and Off The Record. In 2012 his work will be animated in US E-zine ‘Yellow Mama’ Pete will also feature in Radgepacket 6. He speaks two languages, English and Bullshit and is fluet in neither. He has just finished his debut novel and is in the process of finding an agent or publisher.


What is the title of your forthcoming novel?


I've struggled with choosing a title for it. I think It might have been better to have chosen one before I got to the point of submission. However I am 95% certain it will be called So low, So high. Yes, all you avid fans will know, I have already named a short story that, but it's a great title, right? I nicked it from my friend (name drop time) James 'Maps' Chapman. Who is actually a mercury nominated musician. He was nominated the same year as Amy Winehouse for the new comer award. He agreed to let me use the title if I agreed to stop looking through his letterbox and following his Mum around Co-op.

Can you tell me about your novel?

Oh, you want me to continue....? My novel is about the last year of Simon Brewster's class A drug use. Simon's a mess, He can't stop using, doesn't know if he wants to. His life is crap, family hate him, his ex best mates a copper who has to arrest him for stealing legs of lamb on a regular basis. One way or another Simon will stop using- he prays for the blessed release of death but he's such a loser he can't even get that right.

It's all written in first person and present tense, so you, the reader, will be with him as he crashes his way through police cells, crack den's and display cases.

I've tried to make Simon humorous and a guy that people will like, he says things regular people might think but would never say. His brain is screwed into a really selfish outlook on life. Which is so tragic It's amusing.

Was it difficult writing about these issues?

Not really. I find it easy to get the inside monologue on paper. I will say now though, that although I have had a past, this is not an autobiography or anything close. The sad fact is, my life isn't that interesting. So I thought I would make one up. Which is the joy of fiction. I know a few people that have got well so it's been fairly easy using the droll stories I've heard and letting Simon live them out.

What inspired you to write it?


I've always wanted to write since I was at school and a book my father wrote was in the school Library. I was hooked after seeing that.
I read the Burglar Diaries by Danny King, ten years ago. I love it and the diaries that followed it. I thought it would be nice to write then but all the weed and drink stopped me doing little more than thinking about how great it would be to have written something of that standard. I'd never read anything that had made me laugh of the page before. It was also about someone who most people wouldn't like and would take pleasure in slagging them off down the pub (behind their backs). Once I sorted myself out and decided an autobiography would be crap I went for fiction and although different to Burglar Diaries I'd be lying if I said I hadn't been influenced by Danny.

What or who inspire you?

Anyone who is getting on with life no matter what shit it throws at them. I am constantly amazed at how much crap people can actually deal with without hitting the valium for a lifetime of checking their own pulse and not dealing with anything.

Is your writing drawn from real experience?

Nearly always. Whether or not it's mine or not is a different thing.

What are you reading at the moment?

Facebook, hotukdeals.com, the back of a bottle of bleach if I'm really stuck for material and I've just read the first few pages of Stuart Ayris's book. I am look forward to his brother’s book Abide With Me and Danny King's next release.

Are you working on a new story or novel at the moment?

I have been working on my novel for two whole years in April. considering before that I had written little more than my name on every desk, I’ve ever sat at, I feel I've done OK. Mind you finding a publisher/agent seems to be as much work (certainly more thinking time) than the writing took. Everyone wants different things so it's getting everything together and making sure I read the submissions guidelines. So the work at the moment its crossing the t's and dotting the i's.

I also have a short that I'll be releasing for free on kindle at some point. It Kinda relates to the book so once/if I hear I've got a publisher, I'll release it in the build up to release of the book. I have also written just under 10K words of book two- working title 'Die Happy, Die Smiling' (also borrowed from Maps).

When people tell me they laughed out loud from reading something I wrote. As long as it's not because it was diabolically shit.

What do you dislike about writing?

Doing it. I like having the finished product but sitting and trying to motivate myself is a bitch sometimes. I try and tell myself if I did it full time it would be easier but deep down I know I'm pissing in the wind on that one. I'd just have more time to pace the house, fly little helicopters and anything else that isn't typing.

What is the best piece of writing craft advice you have been given?

Stick to 1000 words a day and make them count. I wrote 3500 once and couldn't look at the book again for five months. It was a dreadful day. I see some people writing that amount daily, maybe they can do it and it works out. I haven't really read anyone's work that does that, but The chapter I wrote in a day needed a lot of work in the second draft. 1k a day is still 30k a month. Although I've never stuck to it for more than a month. I'm lazy.

Which author(s) would you say have most influenced your writing?

Sue Townsend, Danny King, and too many TV comedy writers to mention.

What are your strengths as a writer? What do you feel you do well?

I squirm thinking about that. Erm... I'm a good story teller. I had a lot of practise as a child. Did I ever tell you I swam the channel in an hour aged 6?

What are your weaknesses? Where do you feel you could improve?

Spelling, grammar and all that jazz. I'm dyslexic and pretty good at using that as an excuse but I can learn these days. Now I want to and I am learning slowly. However I do use a great editor who is worth her weight in gold. If you need an editor I can refer you to her, My finders fee is very low.

If you had to pick a soundtrack to your novel what songs would you pick?

It would pretty much all be Maps' as that's what I've listened to whilst writing it. He has two albums out at the moment, 'We Can Create' and 'Turning The Mind' They is a third coming soon but I've only heard that through his bedroom window and it was hard to hear it through the glass, balancing on a ladder and not getting caught.

Describe for our readers the genre(s) you write in and why they appeal to you as a writer.

Email ThisBlogThis!Share to TwitterShare to FacebookShare to Pinterest
Labels: Brit Grit Too, Off The Record, Pete Sortwell, Radgepacket 6